I see Ooze as THE introductory-innovative Cannabis accessory brand.

Speaking to newcomers via the simplicity of plugin-play pre-charged vape batteries. Incognito dabbing methods on the go with the Ooze Slugger. The durability of silicone protecting from the age-old party foul of breaking glass or “Dude, you broke the bong…”. With a counter-culture artistic touch, Ooze truly speaks to anyone who’s ever gotten stoned with a notebook and hours to burn.

With the advent of Cannabis legalizations nationwide, use is becoming common faire. Although legal to some extent in most states, a solid base of “under-the-radar-use” holds strong. I see this correlating with the Gen-Xer’s with Ooze’s smell proof bags and incognito pieces. On the flip side, a large market of Gen-Yer’s living “louder” out in the open; being associated with Cannabis publicly is a major trend and quickly becoming a status symbol. As well, long standing non-users being introduced to CBD and Delta 8 like it’s a vitamin.

As you’ll see below, I believe a focus on Skateboard culture & CBD/DELTA 8/Medicinal use/Cultivators would be a beneficial direction to grow in. Also, the majestic world of Fandom and Gamers alike.

I chose “SKATE CULTURE” as my aspirational brand.

Skateboarding has a similar story to Cannabis. In the beginning skateboarders were seen as a public nuisance. A gateway culture. Now like Cannabis, CELEBRATED. Van’s, Flip, Toy Machine, Thrasher, and later to the game Huf, all Cannabis positive companies. Skateboarding as a whole has supported Cannabis positivity from the get go. I think Huf has the weed sock market cornered. Van’s makes Hemp skating shoes proudly rocking the leaf. Flip is notorious for their Cheech n’ Chong/Tom Penny Pro model skate deck; it came out in 2014!

Skating has always been about freedom of expression, innovation, independence, just going against the grain. I particularly like how skate brands focus on functionality first before style. Van’s shoes last me, it’s only a bonus they look cool. I see this in Ooze.

Skateboarding IS the pulse of underground culture.

Skating being recognized as a legit sport has many skaters coming forward speaking out about the positive health effects of CBD. Even Mike Tyson admitted to smoking before his fights. Plus, party culture is deeply embedded in skate life. Skaters like to have a good time. Not to mention how difficult it is to bring a bong out on a full day skate-session. Stashing a bong without wrapping it in a towel in a backpack almost guarantees that it’s gonna get broken. The Ooze pieces are perfect for this, silicone is the new towel.

With public gatherings limited during this pandemic, skateboarding is thriving more than ever. People are getting outside and skating like they used to, outdoor parks are everywhere. Shooting lifestyle at Ooze sponsored events and competitions could be a thing. And since I can skate, I am a human dolly. Plus, I have homies here and out west who are deep in the skating scene. Graffiti backdropped skateparks through a cloud of Ooze smoke is aesthetic.

Hover over each image for a little something about the brand. Click to view. 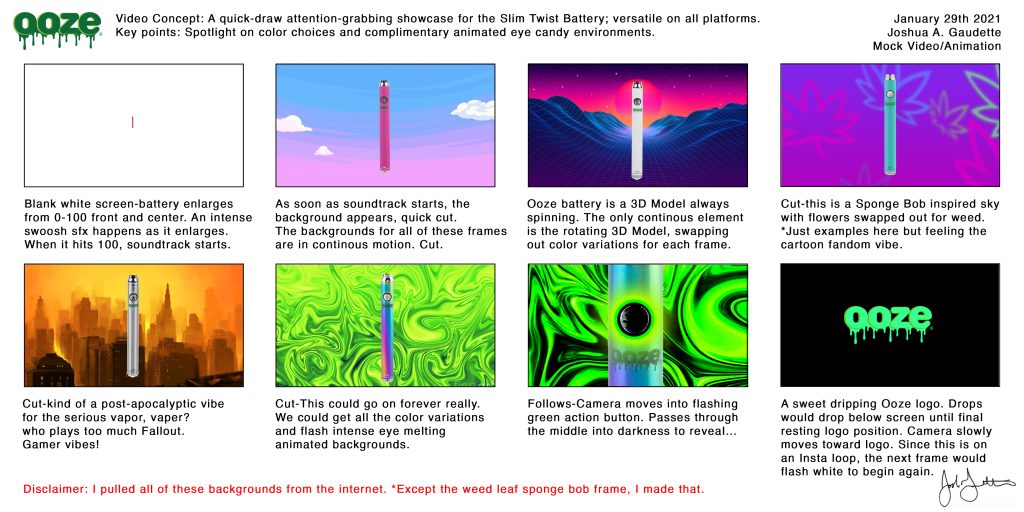 Thinking about TikTok and it’s limitations of content I started looking into how to create Instagram face filters. I found a tutorial I’ve embedded below that looks totally doable within my technical wheelhouse. I would love to make a ton of these.